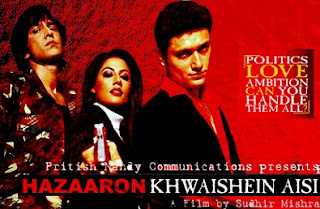 The film starts with a prologue of Pandit Jawaharlal Nehru’s speech of India’s freedom:


"Pandit Nehru made a horological mistake.

At the stroke of midnight, when India awoke to “light and freedom”, the world was not asleep. For instance, it was around 2:30 p.m in New York.

Anyway, my father’s generation loved him and wanted to believe in him and that we had a tryst with destiny too. I did too.

By the time when my elder brothers and sisters (not that I had any) went to college in the late sixties, Nehru had died and his dream had soured. The baton had passed into the hands of his daughter, Mrs. Indira Gandhi.

This is the story of my imaginary sibling’s lives in those times, when India was being pulled in a thousand directions."

This opening is breath-taking because there are very few works of fiction in Bollywood, that have centered around the Indian Emergency period. Set in 1969, 1973 and 1975, the plot encircles the life of three youths of seemingly different backgrounds as they discover their youth and try to focus upon what they want to achieve. As I have researched upon the 70s era and the messy politics contaminating the country, I never had the opportunity to experience it so closely. The dark background of the movie provides a very threatening context of politics and social problems. The title is adapted from a couplet from famous Urdu poet Mirza Ghalib, which says :

Siddharth (Kay Kay Menon) is the son of a retired judge, born and brought up in affluence and privilege. Yet he wants nothing to do with his parent’s establishment and is allured by the communist movement, especially the Naxalite movement of West Bengal. He ferments a student communist group and later on moves to Bihar to work with the Naxalites. He is appalled by the social injustice around him and believes that a revolutionary movement is the only path to solve the problems of the nation. He splurges his wealth on smoking weeds and listening to Western rock music and admires Fidel Castro and revolutionary Che Guevara for bringing about a change in Cuba.

Vikram (Shiney Ahuja) is another character with a similar path going in a very opposite direction, also not believing to follow the same path as his father. His father is a middle class Gandhian who is also an idealist. His father believes that he has a responsibility towards the nation and he cannot back out when he sees danger. Vikram is potrayed as a highly ambitious young guy who wants to be successful in any possible way.

Geeta Rao (Chitrangada Singh) is a link between Siddharth and Vikram. She returns to Delhi after growing up in London. She is the most subtle of all the characters as her aim is neither high ended as Siddharth nor a businesslike attitude as Vikram’s. She also comes from a South Indian middle class family. She is in love with Siddharth and his fiery charm. But later on she is torn apart between her love for Siddharth and his revolution, since she is not sure she could take part in one herself.

Though, the whole film is narrated by Vikram, we see the story proceed with Geeta’s standpoint as she has three set of diverging paths in front of her and the choice will decide her future. The title is aptly chosen because each character had ample scope to think, react and transform clearly and we can imagine the thousand desires of such citizens during the 70s era. Life is grey at the best; sometimes it is very dark. Revolution always starts for the best interest of the people; the revolutionaries always try to make things right in their own way. But as time passes on, it gets cloaked by corruption and viciousness of politics that bends it over to its insidious desires. The ideals upon which a revolution is based looks like a wolf in sheep’s clothing. This movie takes an agonizing path to exhibit how politics changed the life and ideals of the citizens of our country.

After twenty minutes or so, the story starts become appalling, when the group members of Siddharth start backing out, claiming that the thing they are getting into is “too dangerous”. Even when there is a police scare, everyone scatters away, including Siddharth, leaving behind Geeta, who is least concerned about it. Later on we realize that Vikram possesses secret love for Geeta which she fails to reciprocate. Throughout the whole movie, we get to observe that Geeta goes back and forth to Siddharth and Vikram, not being able to cling on to a decision because she gets two different types of comfort from the two different characters. Initially, she follows Siddharth in Bihar to support the poor and the oppressed, but eventually comes back to Vikram momentarily as he provides her the one thing that Siddharth fails to provide; mental calm and security.

The only thing that despises me is the volatile nature of Siddharth. We witness him as a very adamant revolutionary who has sought to work things based on his ideologies, no matter what obstacles he encounters in his path. I had real admiration for the character, but, in the end, it all comes back to square one. He decides to abandon the revolution, because according to him, “the people are not ready for such a drastic measure". He eventually leaves India to study medicine in London, while completely altering the lives of two people. I hate Siddharth for leaving behind Geeta and Vikram in their shattered state. But, then I realize that when one chooses the path of politics, other things seem so trifling.

Overall, the movie is a real epic, a masterpiece conceived so artistically that it introduces us in this whole new aura. The music is exquisite, but, I think that the background music is a bit inefficient. Though Shantanu Moitra has composed uber-awesome songs like Baanwara Mann and of course the title song, Hazaaron Khwaishein Aisi, the background score was not entirely apt. There were many scenes in the movie which required some condiment, like a good background music. But, I guess, the movie was so dazzling that even such minor breaches in etiquette were blinded. I cannot say another word about this movie because I feel like a balloon filled with hot air and might burst up anytime. The characters seem so real and full of life that I want to try and live my life with my mind and heart focused, pondering about other people while I try to figure out the best version of myself. I rate it an 8.5/10.

I hope that this article has been useful to you and certainly you won’t mind giving it a try!
Posted by Ronnie at 11:52 AM